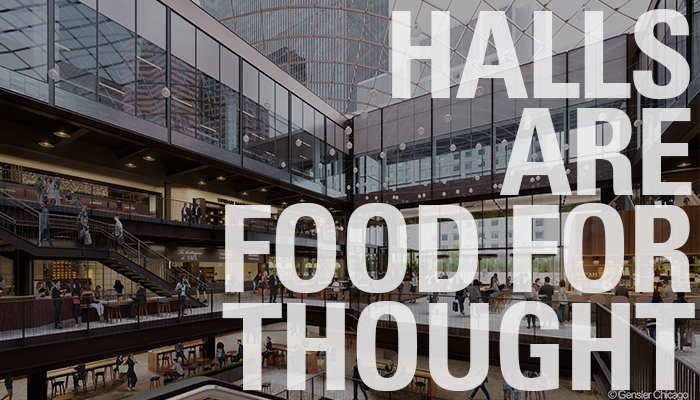 Imagine building a hockey rink in a 1970s shopping mall. Or, conversely, building retail shops inside an aging hockey rink.

Projects like these – where the original infrastructure was built with no thought of such a radical repositioning – are extremely tough to navigate and to implement successfully.

Similarly, developing a large food hall in a commercial office building – one originally designed for tenants to head outside the building for lunch – can be daunting. The infrastructure was not designed with commercial grills, ventilation systems and other staples of food halls in mind.

ESD is in the midst of completing not one but two food-hall projects in Chicago commercial office space – at the Willis Tower and at the Northern Trust building at 333 S. Wabash – where food halls of such ambitious capacity previously did not exist. At Willis, Blackstone Group is spending part of its $500 million renovation budget, which encompasses more than 300,000 square feet, developing the food hall.

The obstacles involved in these transformational projects on the ground floors of buildings constructed a half century ago are immense.

“I would argue the Willis Tower food-hall project is one of the most challenging that’s ever been done,” said Andrew Lehrer, who runs ESD’s High Performance Buildings practice.

Lehrer pointed to a host of obstacles in creating the space inside Catalog (the name pays homage to the building’s original developer, Sears), with exhaust at the top of the list. Considering the impact of stack effect in Chicago’s tallest building, they needed to be creative, given that no mechanical equipment could be placed on the roof deck above the food hall, since part of it is an iconic, curved skylight and the rest of it consists of landscaping and walking trails.

Lehrer and his team designed a plan to release the exhaust in limited, strategic locations while specifying odor elimination technologies to mitigate impact on surrounding properties. A central exhaust system was the most practical and efficient way to support tenant and building flexibility (most food-hall tenants install individual systems that best meet their needs). The variable flow central hood exhaust system capacity of 100,000 cubic feet per minute (CFM) with laboratory-grade heat recovery system is the largest such installation in the country – four times bigger than the next largest, at a university cafeteria in Wisconsin.

“A lot of the time with these food halls, the infrastructure has to have a high degree of flexibility, because the landlord doesn’t have the tenants under contract yet or a new tenant may come in two years later,” explained ESD Senior Project Engineer Maggie McNamara.

What makes food halls such a great idea in existing big-city commercial office buildings? They keep tenants in the building and bring others in, which helps build a community and creates energy. Hardly anyone sits down to a served lunch anymore, so the quick turnaround is appealing to office workers. As well, it allows landlords to capitalize on existing amenities such as conference centers and, in the case of Catalog, the Willis Tower Ledge and Skydeck.

All of this means building owners can get higher rents through their enhanced amenities. Noted a piece in theshoppingcentergroup.com, “a quality food hall will strengthen the landlord’s ability to lease office and other retail space as well as impact the quality of those leases in terms of tenant creditworthiness and the amount of rent tenants are willing to pay.”

During the holidays, a time when office buildings become less active, most building amenity spaces experience a significant reduction in usage. Recently, the food hall at Willis Tower was active, with one food operator hustling to serve 70-80 customers waiting in line. Some wore winter coats after arriving from other buildings while others wore holiday-casual attire, having come from one of the 110 floors above. The food-hall crowds have jumped from a few years ago – according to a Cushman & Wakefield report, by the end of 2020 food halls in the United States will have nearly quadrupled from 2016, when 120 spread across the land.

“We were able to use some of our experiences at Willis Tower for our design approach at another prominent high-rise office building going through a major transformation,” noted McNamara. “We understood the building owner’s vision for the high-rise and the purpose for the food hall as part of that vision. We developed a solution for locating and distributing kitchen exhaust to optimize the food hall’s footprint (on the second floor) to leverage the imbedded opportunities of the property.”

Repositioning high-rises offers developers, tenants and communities an opportunity to create value and energy – often beyond a property’s site. Whether it is a new building, a large-scale repositioning of a building, or a commitment to make smaller-scale investments, an amenities war is afoot, and a food hall is one of many amenities that can add significant value for the building owner, the building’s tenants and the surrounding community.