After Almost Half A Century at ESD, Rivera to Say Farewell 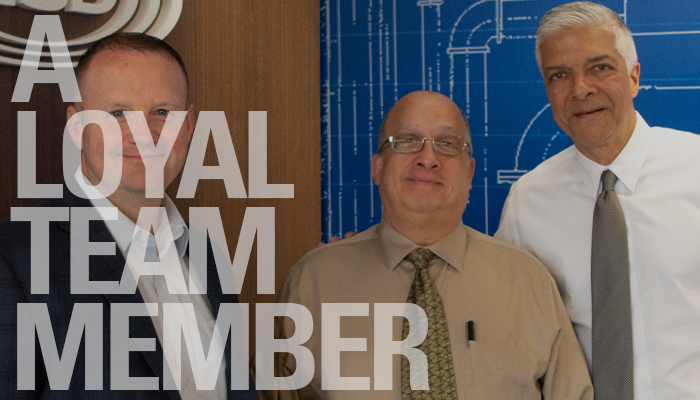 Carlos Rivera, the longest-tenured employee in ESD history, is retiring after 49 years on the job on Wednesday, July 3.

The Senior Project Engineer with an expertise in electrical engineering has been part of this firm almost since its launch in 1967. To give you a sense of the length of his devotion to ESD, calculations back then were done manually, and using slide rules, charcoal pencils and sandpaper were part of the job. Computers? Unheard of.

Carlos attended Bowen High School on the Southeast Side. For nearly as long as the company has existed, ESD has supported the school’s Industrial Cooperation Education (ICE) Program, where it employs Bowen students to give them an opportunity to develop professional skills. In fact, more than a dozen Bowen graduates work at ESD today, and many have spent 30+ years with us. And Carlos was one of the first.

He became a mentor to all of the Bowen students who joined our firm. Carlos helped shape ESD’s family culture; he was a big proponent of giving back and remains one to this day. He’s consistently demonstrated our values: Respect everyone, work hard and play to win.

During a ceremony honoring Carlos at our Willis Tower headquarters on June 25, he talked about how ESD is a family, praised founders Hem Gupta and Bob Ladner and asked everyone to remember the importance of relationships in their work life.

Carlos has always been able to show clients what is possible. At the Willis Tower, where he worked on the 103rd-floor Skydeck project, he designed electric heating cable for the top and bottom edge of the glass, among other responsibilities. Even though Carlos has a fear of heights, he attended the VIP reception up there – and stood on the ledge.

The full list of projects Carlos has touched would overflow your inbox – as would the people he has touched. Given all the non-profit projects he likes to work on, he won’t be bored in retirement. And fortunately, he will be a contractor for ESD.